Intimation 2:  Regarding the Omnipotence of God

The substance of the first error, as we have been discussing, was to transfer an attribute peculiar to God alone to something other than God. And the substance of the second error is to negate one attribute of the perfection of God– that attribute being omnipotence. We say this because nowadays it has become a too common practice among people with a Western education to say or to write that nothing can ever happen contrary to the law of Nature. They try to prove this assertion into ways:

Overview of rational arguments about law of nature

The rational argument they employ runs like this: We observe, for example, that fire always burns, and have never seen the opposite; or, we daily observe that a child is born of its father and mother, and have never seen the opposite; hence, we can conclude that anything which violates the rule of Natural would necessarily be a rational impossibility. It is on this principle that these people have denied miracles which are unusual or unhabitual things. They deny some of the miracles quite explicitly by repudiating the report itself, and in the case of others, where an outright rejection is not possible because of there being a definite and clear statement in the Holy Qur’an or the Hadith, they deny implicitly by resorting to false interpretations and rationalizations. This being their attitude to the miracles performed by the prophets, it is no wonder that they should summarily dismiss the miracles performed by the saints. And the basis of such a dismissal is always the same assumption that it is rationally impossible for things to go against the law of Nature.

Answer to rational arguments about law of nature

Our readers can see for themselves that this assertion is a proposition that needs to be proved before it is accepted. And it would not serve as a valid argument to mention the more fact that one has never seen such a thing before. For, in this case, the method of induction has been used. But, in employing this method, one observes only a few particulars out of many, and if we apply a general conclusion based on the observation of a few particulars to other particulars also, such a procedure cannot give us a certain proof. Of course, the conclusion may be taken to be proved, not in the degree of certainty but of probability only, for other particulars as well.

But this probability would be confirmed as a certain proof only when it is not contradicted by a more sound argument. And, even in this situation, we can only say that it is always likely to happen like that, not that it must necessarily happen like that always-unless we can prove that it is impossible that is should not happen like that. In order to negate the possibility of the opposite proposition, one will have to produce a definite argument. If a more sound argument is already there to contradict the probability, the latter will not possess even this much efficacy, and one will have to follow that stronger argument.

Overview of traditional argument about law of nature

The other way of attempting to establish this assertion is to appeal to the authority of the Islamic Tradition, and to cite this verse of the Holy Qur’an as evidence:

This being a verse of the Holy Quran, it is, no doubt, an authentic argument.

Answer of traditional argument about law of nature

But whether this argument proves the proposition depends on two conditions:

1) Firstly, the word “Sunnah”(way) should mean the way or practice of God in respect of all matters.

2) Secondly, the agent of the “change” should be indefinite, not and include God as well as other –then –God. But there are no arguments to prove these two contentions. In the context in which the word “Sunnah” occurs, it may, rather it does apply to certain particular and definite matters which have been explicitly mentioned in those verses, the substance of which is the domination of truth over falsehood either through a conclusive argument or by force of arms. Even if we take the word “Sunnah” (way) to have a wider and general connotation (namely, the practice of God in respect of all matters), the subject of the verb “to change” is not God, but other–than–God, and the verse actually means that no one else can possibly “change” the habitual way or usual practice, of God, as does sometimes happen in our worldly life when a royal command is obstructed by the opposition of a rebellious party. The purport of this phrase in the Holy Qur’an will then be to confirm the promise of reward and the threat of punishment already made.

The third argument and its answer

We have come across even a third way of proving the assertion that nothing can go against the law of Nature, which is composed of a rational argument and an argument based on Tradition. Thus, it is said that “the habitual way of Allah” is a promise in the form of an act, and, according to an explicit statement in the Holy Qur’an, it is impossible that a promise made by Allah should change. The first of these contentions is rational, and the second is Traditional. Now, the second contention is true without any exception, while the first is not acceptable.

We shall explain what we mean by taking an example. We have already established that the material world is not eternal. but created and temporal. Now, let us suppose that the earth went on having rains in the rainy season year by year, and this became established as the habitual process. But there once came a rainy season when there was a complete drought. This had happened for the first time, and it did not as yet form a part of the habitual process. If the habit of getting rains in the rainy season was “a promise in the form of an act”, how did things go against this promise? the variations of matter are all of them contingent and temporal. When a certain species appeared for the first time in matter, and the individuals of the same species went on appearing for a long time, this became established as a habit. Now was it, then, that the individuals of a different species being to appear–either through evolution, as men of science say, or through germination, as people of truth have solidly established?

To read the Third Intimation about law of nature, Click on the link below: 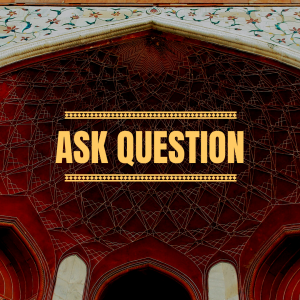